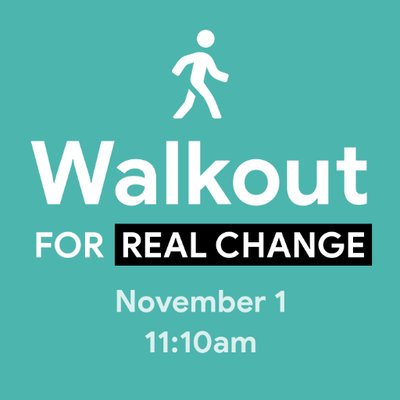 Men and women of Google are standing together to make a change and create a working environment that is equal to all. Yesterday, the staff at Google staged walkouts around the world to protect the way the company treats women. Employees have set down their demands that are centered on how sexual misconduct allegations are handled. One of the key changes is to call an end to forced arbitration, meaning the victims could have the opportunity to sue.

Last week, the New York Times reported on an alleged high-profile executive receiving a $90m pay-out when leaving the firm despite having credible allegations of sexual misconduct made against him. At the time of writing, the creator of the Android mobile OS, Andy Rubin is denying all allegations.

Richard DeVaul, a Google executive from the X research lab resigned last week. According to reports, DeVaul made unwanted advances towards a female who was there for an interview. The woman reported Mr. DeVaul who said that the incident was an error of judgment.

Mr. Pichai admits that the report in the New York Times was difficult to read. IN addition to the incidents above, there have been a total of 48 employees being sacked for sexual harassment, all receiving no pay-out.

Staff employees are making a stand for their colleagues who have been affected by sexual harassment. Upon leaving their desks, the employees each left a note stating, “I’m not at my desk because I’m walking out to protect sexual harassment, misconduct, lack of transparency, and a workplace culture that’s not working for everyone.”

We, Google employees and contractors, will walkout on November 1 at 11:10am to demand these five real changes. #googlewalkout pic.twitter.com/amgTxK3IYw

Demands have been passed forward to the management at Google, which includes:

Sundar Pichai, Google’s chief executive has informed employees that he fully supports their right to taking such action. Currently, women make up 30.9% of Google’s global workforce.

Sliders Have Had Their Day