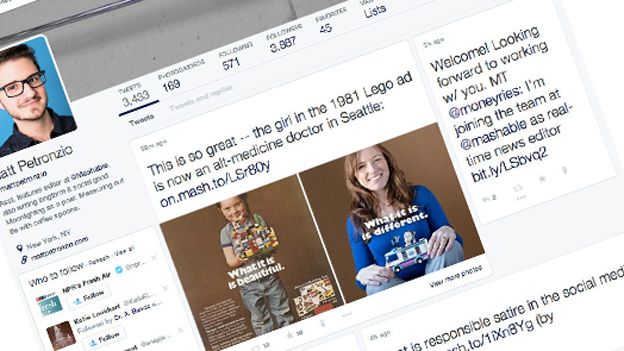 Twitter is the latest in a long line of websites to feel the wrath of its users, after it started A/B testing a new design for its service.

Perhaps it is because Twitter’s core user base is a vocal, fickle bunch that are used to venting in 140 characters or less. Or perhaps it is because if Twitter does use the new design, it will change the site into a hybrid of Pinterest and Facebook. But the new look has been castigated by most that have seen it.

The weird and wonderful world of the web means that all sites need a redesign at some point but the fact remains that no redesign will please all users of a site.

While many will shout that Twitter doesn’t need any changes, a recent earnings report by the company shows that it is not growing quite as fast as investors are hoping. This is despite Twitter currently claiming a not-too-shabby 232 million users.

To get new users interested in the site, it believes that focusing more on making images look nice and big and focusing less on text and a timeline will entice more people to tweet.

Having a timeline on Twitter, though, means that you can scroll through recent tweets you may have missed with ease. If this does disappear with the proposed new look, which uses a mosaic image approach and is lacking in chronology, then Twitter loses an invaluable USP – its simplicity.

Twitter’s minimalism and ease of use is what brought people to the service in the beginning. It was perfect remedy to Facebook, which was getting increasingly bloated with ads and spam. So the potential of this disappearing will be hard to swallow for true Twitter users.

Whether Twitter decided to change or not, it only has to look at its main rival Facebook to see that any change warrants backlash – whether they end up being good or bad.

When Facebook announced the News Feed in 2006, many users organised ‘A Day Without Facebook’ protest. Considering it is hard to think of Facebook without the News Feed now, it was good that the social network didn’t listen to the huge amount of naysayers.

And that was the first in a long line of redesign controversies for Facebook. In 2009 it was criticised again for trying to be like Twitter (the irony of this is not lost on us) and offering real-time status updates. More recently, it started to rejig statuses, so that ‘popular’ posts would stay in your timeline longer. All of this lead to: backlash, backlash, backlash.

Who knows if Twitter’s latest design will be one rolled out to the rest of the world – that’s the beauty of A/B testing – but we’re sure that any changes it makes will be ridiculed and shunned at first, and then all will be well with the world again.

And this is why redesigns should be welcomed by the web world. Considered change is no bad thing when the end user benefits at the end.

If there’s an ulterior motive for the redesign, though, then you will quickly notice – as there will be no users around to tell you if what you have done is good or bad.

Marc Chacksfield is the deputy editor of TechRadar.com, the UK’s biggest technology website.

3 Things You Should Be Doing on Social Media