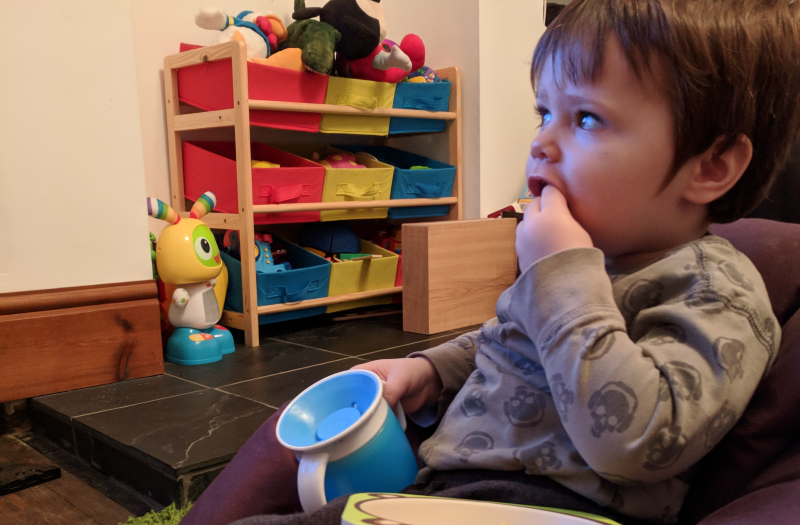 As the (sometimes reluctant) owner of a 2-and-a-half year-old child, I am definitely guilty of sometimes relying on our big boxy friend in the corner to do the parenting. “Hell..” I’ve thought on more than one occasion, “I took him to the park and the shops today, a little bit of TV won’t hurt”. (Especially if it’s something educational, or inclusive, like Mr Bloody Tumble).

And yeah, it won’t hurt. Everybody watches TV. As a nation we are collectively glued to the small screen. Do you know why? Because it’s entertaining. Look at Breaking Bad or The Wire – absolute visual masterpieces that have made my life better just by existing. TV’s not a Bad Thing in itself.

How much TV is too much TV?

But should we be relying on the “Squarent” to shoulder some of the burden of raising our toddler? It’s definitely easier to plonk him in front of some inane Netflix series (Little Baby Bum is one of his favourites at the moment – watch it on Netflix, it’s really, really weird) while we are discussing our day in the kitchen than to actually interact with him and teach him things. Don’t get me wrong, I love the little bugger and really do enjoy spending time with him …. But it is knackering after a long day at work.

We’ve been trying an experiment over the past couple of weeks. We decided that in between getting in from work/nursery/grandparents and the little blighter’s bedtime, we’d have a ‘No TV’ rule (weekdays only – we’re not heartless).

Oh boy – there were tantrums. He was apparently very used to waddling through the door and seeing whichever brightly coloured cartoon was flavour of the week. And when anything bad happens in a toddler’s life, it is literally the worst thing that has ever happened in his life.

So there was a lot of screaming, crying and stamping of feet. And that was just my wife. But after only a couple of days, little lad seemed to completely forget that there was a TV in the corner and stopped the constant stream of “Where ‘mote? Where ‘mote?”

We had broken him. And it was a hell of a lot easier than we thought.

Reducing TV for a toddler

And you know what? It actually been really good. Yeah, I’ll admit he needs a little bit more attention now – finding some particular toy train he’s after or something like that. But we have been a bit more hands-on too – he’s taken a much more pronounced interest in his books now – which is great because he has around a hundred of the things and it’s good to see them get some use.

But come tea time, or bed time, there aren’t any wailing screams of despair as he struggles desperately against leaving his favourite bright green alien or whatnot. No tears as we tell him it’s time to brush his teeth.

So fellow parents, although it seems like you’re throwing away some of that lovely peaceful time while they’re glued to the gogglebox, give it a go. Get through the tricky first days and you’ll see your little person turn into a much more pleasant, interested and agreeable being.